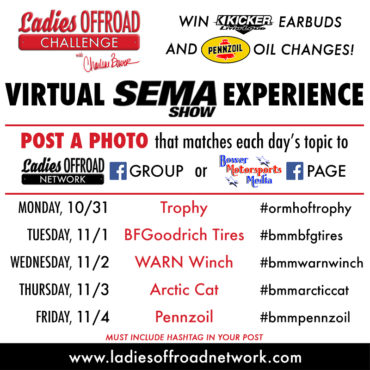 Charlene Bower, Kristie Moore, and Leah Singleton are heading to Las Vegas, NV for the SEMA Show, Event #4 of the Ladies Co-Driver Challenge, from October 31st to November 4th, 2016. Because the SEMA Show is a trade-only industry event, it is not open to the general public. Therefore, we wanted to find a way to include all of you.

We will be holding social media drawings throughout the week!

Participate every day by posting a photo per the designated theme to the Ladies Offroad Network Facebook Group or Bower Media’s Facebook Page. Make sure you include the associated hashtag, so we can verify your entry!   We will be logging all the entries for the day and then randomly drawing two winners each day, one for a pair of Kicker Audio Headphones and one for a Pennzoil Oil change at a Mopar Dealership!  Winners will be announced on Monday when Charlene returns to the office.

The daily themes are based on Charlene, Kristie and Leigh’s big meetings of the day.  As you participate with your own local “scavenger hunt”, they will be doing the same in the halls of SEMA!  Follow their adventure on Bower Media’s Facebook Page.

Monday, October 31 – Trophy
• Post a photo of a trophy. Any trophy will do!
• Include the hashtag: #ormhoftrophy

The girls will be attending the Off-Road Motorsports Hall of Fame dinner where we will celebrate the 2016 Inductee Class.  In addition, Charlene is nominated for the Industry Rising Star Award.

The girls will be at the BFGoodrich Tires and SCORE International area on Tuesday as the Baja 1000 festivities kick-off with press conferences, parades and qualifying.

Wednesday, November 2 – WARN Winch
• Post a photo of a WARN winch or something with WARN on it…
• Include the hashtag: #bmmwarnwinch

The girls will be at the WARN booth checking out all the new products being released.

The girls will have a first hand experience with an Arctic Cat at their demonstration area.

Friday, November 4 – Pennzoil
• Post a photo of something Pennzoil. Double your submission if you include a Jeep in your picture!
• Include the hashtag: #bmmpennzoil

The girls will have the opportunity to be involved in the Pennzoil and Jeep experiences.

There will be two winners chosen for each day. All winners will be announced on Monday, November 7th.

Chat About This Story

Get News and Race Results Delivered

Join this weekly Race Results & New News email. We put everything together for you and deliver it to your inbox Every Tuesday! It's got what you want...